We live in a great place. In less than an hour we can be at the Pacific Ocean, the mountains, or the desert. All of these places have their unique qualities and we enjoy most of them. It’s really a toss-up for us- between the ocean and the desert- depending on the season. The disadvantages are, you can always expect a crowd.

Yesterday we decided to take advantage of the spring flowers in the desert. With Joshua Tree National Park a mere 80 miles away, we packed a lunch and headed out first thing. By 9:00 we were in the park with mild temperatures and a sunny day before us.

Joshua Tree National Park is named for the Joshua Trees found there. You won’t find them in all areas of the park as they are specific to elevations/conditions, but you can also find them in many parts of the Mojave Desert. They’re such interesting looking trees with almost outstretched arms which may be attributed to how they got their name. The lifting branches were thought to be the arms of Joshua leading to the Promised Land according to an old Mormon legend. It’s really hard to determine how old a Joshua tree is as they have no growth rings. These are protected trees in many areas. You will often find desert homes built around the trees to accommodate them. They can live, it is thought, up to a hundred and fifty years! The spiky and succulent leaves are not cactus but part of the agave family (information obtained through the Joshua Tree National Park official newspaper).

The park is partially located in the Mojave Desert and the Colorado Deserts.  Within the transitions of the two areas, there is great diversity of plants and species.

We entered the park through the Joshua Tree Visitor Center located outside the town of Joshua Tree.  The Joshua trees had already bloomed and were spent for the most part…. 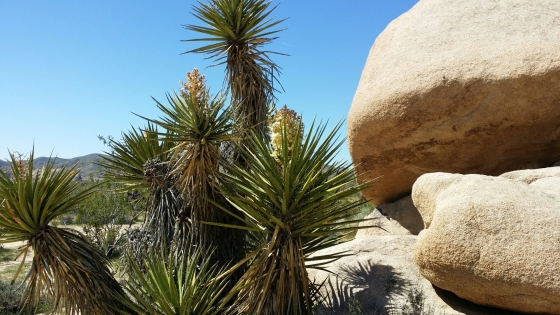 … but not all of them thankfully. 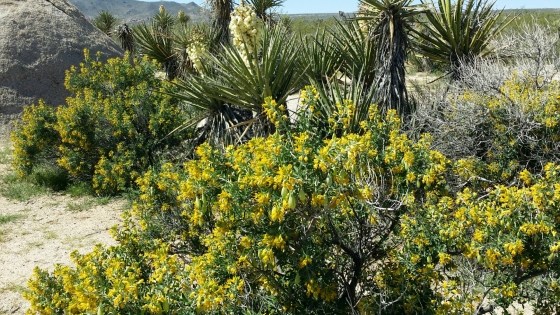 There were also many rock formations,  hikers, and rock climbers in this area of the park. 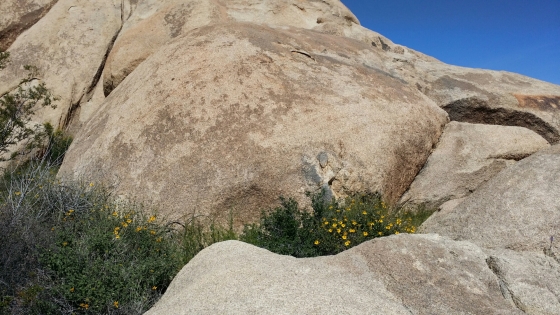 As we begin the drive into the more Southern portion of the park, we came across a stop that seem to attract carloads of people.

(Maybe it was the name?)

We also passed by such interesting places as Sheep Pass, Jumbo Rock, Split Rock,  Cap Rock, and Hall of Horrors. There were several campgrounds (all full) located throughout the park. Close to a military base in nearby 29 Palms, Palm Springs and other desert communities, including the many suburbs located near Los Angeles,  the park attracts many outdoor enthusiasts.

As we meandered our way from one end of the park to the other, we often stopped to take pictures of interesting rocks or plants that we came upon.

At about halfway through the park we must have entered the Colorado Desert portion as the scenery changed considerably. There were fewer  rock formations with sprawling vistas and distant mountains instead.

We then came across the Cholla Cactus Garden where miles and miles of these cactus grew. 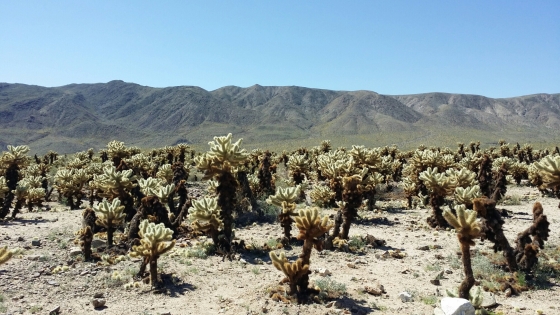 Next stop, the Ocotillo Patch. 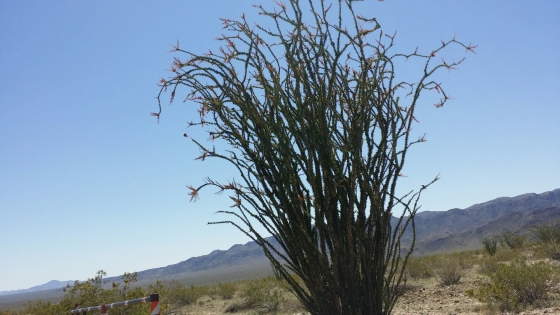 … and the desert blooms we had been searching for. 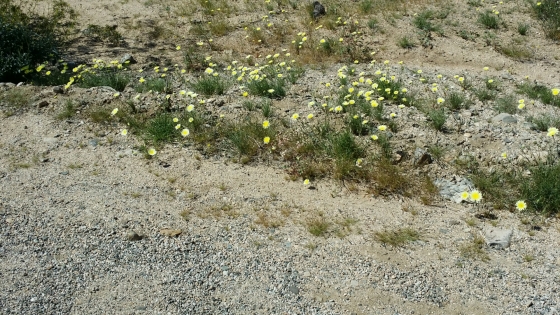 We stopped for our picnic lunch near the Cottonwood Springs Visitor Center on our way out of the park. The majority of the flowers could be seen as you exit the park east of Indio. Along the highway there were Ocotillo and these gorgeous yellow flowers growing everywhere.

It really was a great day trip. I love to be outdoors and see God’s handiwork up close and personal!